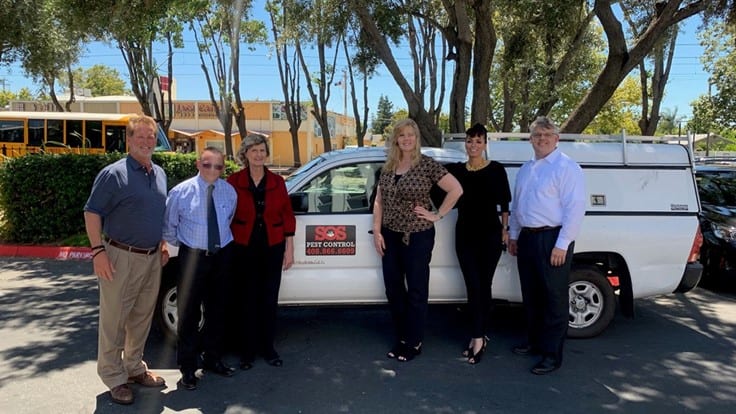 CAMPBELL, Calif. – Rollins strengthened its presence in the Bay area with the acquisition of SOS Pest Control and Termite. The deal closed on July 15 and terms were not disclosed.

SOS was owned and operated by Carol Williams. Her late husband, John, worked for Orkin in the mid-19702. In 1979, John Williams came home one evening and said, “I’m tired of selling pest control for other companies; I want to start my own,” Carol Williams recalled.

By day, John Williams gave out his new business cards to anyone he came into contact with and started growing his business one customer at a time. By night, he worked as a security guard for Apple Computer Company; when Steve Jobs and Steve Wozniak had their first and only building. Carol Williams ran the office for 20 years and she would later take over operations when John’s health declined.

Margaret is an integral part of the business and the local pest control community. Adding the title of President of Pest Control Operators of California, Santa Clara Valley district from 2016-2018 to her long list of personal and professional accomplishments.

In 2001 John showed signs of memory loss and had to retire; he passed away in 2006. Carol stepped into the role as licensed operator in charge, supervisor, fleet manager, safety and training administrator, equipment buyer and full-time decision maker. Carol and her team gritted their teeth and managed to hold on during the recession, a test they are grateful to have endured.

Carol and her family have an incredible 40-year journey in this family business. They have learned much and have seen much change during their tenure. They have weathered many storms by embracing the changes and adapting when necessary. Many of their customers have become familiar friends on the phone. “Helping them overcome their pest problems, giving advice, and soothing concerns has been a pleasure.”

Carol and her team are excited to join the Rollins family and will continue to service their customers under the SOS brand. SOS was represented by Kemp Anderson Consulting.