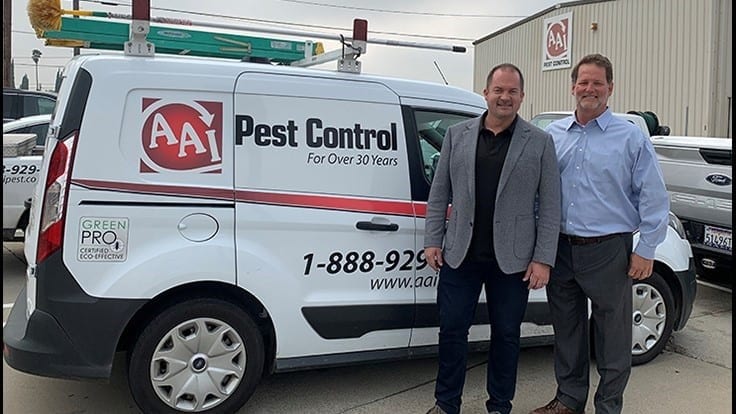 SALIDA, Calif. – Terminix strengthened its presence in California’s Central Valley and the Bay Area with the acquisition of AAI Pest Control. The deal closed on Dec. 10, and terms were not disclosed.

AAI was established in 1982 by Mike Rogers. The company was focused on high touch pest and termite services and would be headquartered in Salida. For twenty years, Mike grew the AAI business. From 2002 to 2003 Mike took a step back for personal reasons. It was during his return to work that he began talking to his daughter Gretchen and her husband Ben Miller about making the transition to his retirement.

In June of 2003, Ben was brought on as vice president of operations and charged with leading and charting a course for AAI’s future. Over the next several years, Mike and Ben worked together to increase AAI’s recurring revenue; in late 2004 AAI opened an additional branch in Livermore, Calif. The new office gave employees servicing cities in the Bay Area a closer hub for routing out each day. In 2007 they moved the branch office back over the hill to Tracy, Calif. This decision proved incredibly successful; as the employee pool grew significantly in Tracy with the lower cost of living as compared to the Bay Area, and now the two branch offices (Salida and Tracy) were similar in size. Each branch location is optimized with a branch supervisor who can more easily oversee the technicians under them and respond to customer issues more efficiently.

After working together for seven years, Mike and Ben completed a successful transfer of ownership in January 2011.  This transition capped over 40 years in the Pest Control industry for Mike and opened the door for him to focus on retirement with his wife, kids, and 11 grandchildren.

Ben Miller has successfully navigated the past 8+ years as the sole owner of AAI. During this time, he led his team through the great recession in California while increasing profitability, continuing growth, and preserving AAI’s long-standing name with customers and the communities it services.